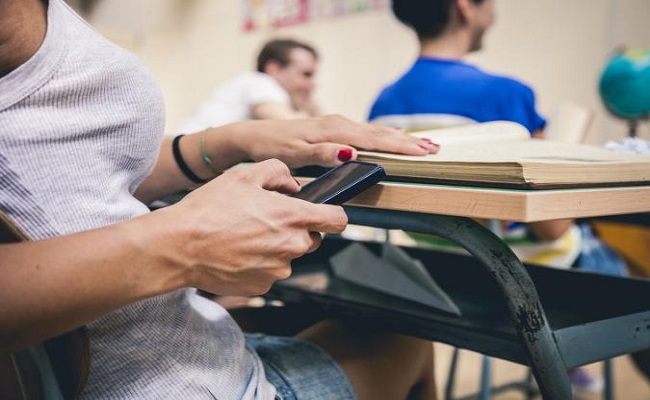 In a new law that has just been passed over in France, which will come into effect in September of this year, all schoolchildren in French schools will be banned from using mobile phones at schools!

It has long been the topic of discussion whether children should be taking their mobile phones into class or even taking them to school, but once this law does come into effect they will not be allowed to, and it is certainly going to be an interesting concept.

There is of course one main reason this law has been passed and that is way too many schoolchildren, not only in France but the world at large are taking their mobiles into school and are being distracted by them when they should be studying.

Updating their social media pages is one thing I’m sure most kids do these days, but in class they are also using them as a tool for studying, which is something that is a benefit but not when they are doing everything but study via their mobile devices!

It is very true to say that the French as a nation, do tend to bring into law all manner of weird and wonderful regulations, and whilst some of them do have merit some of them may seen quite an alien concept to other nations.

However, I am more than aware that all eyes will be on France later this year when this new law banning mobiles form schools does take effect, for there are many other countries of the world that are itching to bring into effect a similar law and set of regulations surrounding mobile phones.

Most parents that do quite happily allow their children to use mobile phones are aghast at the thought of them not being able to take their phone into class, much more so with tragic recent effects surrounding terrorist events in France.

Not being able to communicate with your son or daughter when there is such an incident is worrying a lot of parents and they are demanding their children should be allowed to have a mobile with them at all times and keep them switched on, just in case something does happen, but the powers that be in France do not think that is something they should be allowed to do.

Will the Law be Policed Correctly?

There is however no doubt in my mind that many schoolchildren are going to continue to smuggle into school and into class their mobile devices once that law does come into effect, as let’s face it, that is what kids are going to want to do and will continue to do so.

However, with it becoming law they do run the very real risk of having their mobile phones seized and removed from them if and when they are found to have them on them in class, which is all part and parcel of being a school child in France from September!